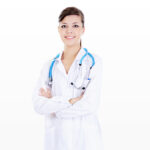 Clorinda Mallamaci was born on 3/31/60, third child and first female of five siblings. She grew up in San Lucido, a small coastal town in the province of Cosenza. Since childhood she was maternal and protective.

She reported to her mother that her older siblings ran away from their bedroom window instead of having afternoon rest and for this reason it seems that she was literally “hoisted” over the bedroom closet and abandoned…. but this is, perhaps, a legend.

After completing her secondary studies, she moved to Siena, Tuscany, to attend the Faculty of Medicine and Surgery. Serious and diligent student, she shared her university experience with her older brother (alas), and later with her sisters.

Clorinda, or Patrizia – as she is called in the family – graduated on 06.04.1993 at Siena University with vote 108/110. Subsequently at the same university on 22.11.99 he completed the Specialization course in Internal Medicine with final mark 70/70. On 24.06.2019 he obtained a II Level Master in Health Management at the Unicusano Università degli Studi Niccolò Cusano Telematica Rome.

Among the courses attended, the main ones are listed:

From 15.02.2000 to 31.05.2000 she collaborated in the realization of a research program at the Institute of Medical Semeiotics – Director Prof. Alberto Auteri – University of Siena – Polyclinic headquarters “Le Scotte”, consequential to the realization of the Project ” Vascular Diseases ”

From 16.03.2008 to 04.09.08 she served at the U.S. Company no. 7 of Siena in the profile of: Medical Director of Oncology – office holder at the U.O. of Medical Oncology – Zona Alta Val D’elsa- Campostaggia-Poggibonsi Hospital, dealing in particular with “Palliative Care” in the field of Integrated Home Cancer Care.

She has participated in numerous conferences as a speaker and has published original and interesting scientific articles.

Head of the district offices of Tavarnelle V.P. and Greve in Chianti as Medical Director at the USL Tuscany Center of Florence – SOS Health Coordination of Services in the South-East area, with the duties of:

Management and organizational activity of the district territorial garrisons in the south-east area.
Tutor for trainees of the training course in General Medicine

Patrizia is my personal consultant for adult diseases, the exchange of views is daily. She does not visit my patients and has no working relationship with them.