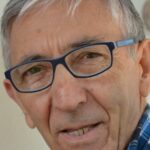 Bruno Calvano is the pioneer of Pediatria Domani. He is a very experienced doctor and still contributes directly to the discussion of the most complex cases.

Bruno grew up in San Lucido, a small town located on the Tyrrhenian coast of Calabria. Lived his childhood in the post-war period and at a young age emigrated with his uncles, Amelia and Gaetano, in Argentina. On his return to Italy he resumed his studies by attending the Classical High School “Bernardino Telesio” of Cosenza. In order to attend high school he had to reach Cosenza in “littorina” (a very old puff-train).

He would get up in the morning at four o’clock to return home at 6 p.m.

After successfully completing his secondary studies, he enrolled in the Faculty of Medicine and Surgery of the University of Siena. He graduated on 20 March 1973 with the highest marks and achieved the academic ring, an immensively valuable recognition award. At his graduation was attended by three of his grandchildren -children of his beloved sister Marisa – all future doctors.

He declined the offer to remain in the medical clinic with Prof. Angelo Caniggia and decided to return to Calabria, to realized his love dreams with Maria and in a short time became a point of reference for the local population as a family doctor and hospital medical officer in the Department of Orthopedics of Paola Hospital.

On 21 November 1978 he specialized in Orthopedics and Traumatology at the University of Naples. The pleasure of carrying out and loving his work has always been the fundamental binder with his innate clinical abilities. His example inspired his grandchildren who were helped in their studies and guided throughout their careers.

It is said, but perhaps it is legend that a part of the expenses of the consultant doctors who departed from Genoa and Naples to collaborate on the project “Pediatrics Tomorrow” have been paid by him.